What do you do at Addison Clark? 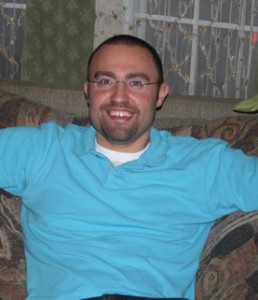 My official title here at Addison Clark is Web Developer/IT Manager, so that generally means if there is any kind of computer related issue that falls on me to tackle. This can range from the obvious web development stuff to trouble setting up emails on smart phones.

What’s your favorite thing about your job?
That would definitely have to be the people of Addison Clark. Even if everything else is great about your job, the people are the difference between liking and loving it.

Name three things you’ll find on your desk at work.
Well, I am assuming you don't mean the obvious mouse, keyboard and monitors trio. I would be remiss if I didn't start with the picture of  my wife & I. That actually leads me to the next item a small, hand carved Hawaiian Koa tiki mask; which was a gift from a friend who had recently been to the islands. Not being a vain man, I have placed it strategically over my face in the picture, so that way when I look at the picture all I see is her. The last item would have to be my smart phone, I take it everywhere because without it I feel very disconnected from the world. There is just something about being able to connect with just about anyone, anytime just feels right.

What is your favorite social media site and why?
Actually, I don't technically have a favorite social media site. I have an account with just about all of the heavy hitters: Facebook, Twitter, Google+, Pinterest, etc., but I rarely use most of them. I suppose the best I can do is tell you the one I use the most is Facebook. Though that is just because for me they each have their own specific purpose and Facebook's is to keep in touch with friends.

What is your biggest pet peeve?
I am usually a fairly easy going guy so most things tend not to bother me much, but there are a few things that do get under my skin. The biggest one of those would definitely have to be terrible drivers. In fact, just about the only time you will see me get angry is while behind the wheel. Luckily for me, I only live at most 20 minutes from almost anywhere I want to go on a weekly basis. So my road rage is kept to a minimum but is especially tested while driving around Short Pump.

What do you enjoy doing in your spare time?
That is an easy question, spending time with friends and family wins hands down. Of course, everyone needs some down time, so when I need mine you can find me either on my computer or in front of the TV doing one of three things: Watching a movie, TV show, or my personal favorite - playing a video game.

Who would play you in a movie?
Believe it or not, I have actually thought about this before now. I had always thought Bruce Willis would be perfect. Not necessarily because we look or act alike, but it would be awesome to say I am in the same company as John McClane. If you don't know who Mr. McClane is then I would say shame on you and you need to watch the entire Die Hard franchise stat!

If you could choose any ONE superpower, what would it be and why?
Ha, I have actually given this even more thought than my movie self. This is actually one of my own creation, or at least independently developed, and plays on my interest in quantum mechanics & particle physics. I would love to be able to control something I have dubbed the 'Hacker Particle', which as the name suggests, has the ability to hack other particles and the four fundamental forces. This essentially allows one to mimic most any superpower, sort of like wishing for infinite wishes, mwahaha.

Are you a cat person or a dog person?
I am actually a strong believer in both. They each have desirable characteristics, it just depends on your situation. If you are looking for a low maintenance pet that is still adorable, then cats are a great choice. Dogs on the other hand can be very high maintenance but are generally more sociable than cats. Full disclosure, I actually have 2 cats, but do expect to get a dog eventually.

If you could travel in a Time Machine, would you go back to the past or into the future?
I would unquestionably go into the future; being in the IT field, it is almost a given. I would love to know what technological breakthroughs are just over the horizon. My only real interest in history has been for perspective; like they say, "You can't know where you are going without knowing where you have been." Plus, I REALLY don't want to mess with the whole temporal paradox thing.